Electric mobility may transform the Automotive industry like never before

It is a common and unanimous opinion among the operators that electric mobility is a growing sector becoming a trend not only sustained by an elite of technology passionate but something that represents an essential component for the future of the private transport and the public one as well.

Automotive industry globally is at the cusp of a major transformation. Growing concerns for environment and energy security clubbed with rapid advancements in technologies for powertrain electrification, increasing digitalization, evolution of future technologies and innovative newer business models and ever-increasing consumer expectations are transforming the automotive business worldwide.

One of the key facets of such a change is the rapid development in the field of electric mobility which might transform the automotive industry like never before.

The Study “Feeding the Future of Europe” by Cambridge Econometrics and commissioned by the European Climate Foundation shows how electric cars can help revitalize European economic growth, creating around 206.000 new jobs by 2030 while reducing the ‘air pollution. The challenge for the future, as highlighted by Cei-Cives, the Organization for the training of electric mobility, is to develop a new industrial sector that includes equipment for recharging, services, collateral businesses (rentals and sharing) creating new job opportunities while taking care of our future.

It is clear that electric mobility is definitely a growing industry, although at a different pace depending on which markets and countries. China, with over 580,000 cars sold in 2018 and a growth of 72% compared to 2016, is the most important electric car market in the world, followed by Europe and the USA. In Europe, Norway is the third largest market (after China and the United States) for registrations, followed by Germany, Great Britain and France: these four countries alone represent 70% of the total market across Europe.

Widukind Baier, the InterSearch Practice leader in Europe and MEA for the Automotive industry, comments the situation in his Region:

Norway continues to be the European leader in e-vehicles. Almost every second newly registered vehicle is now has an electric motor; last year this number was 73,000. The fact that so many drivers in the Scandinavian country are switching to electric mobility is largely due to generous government subsidies for alternative drive systems. The Norwegian government waives VAT for e-car buyers and pays import duties, and Norwegians can also look forward to a reduced motor vehicle tax. Electric cars can be parked free of charge in many places and use bus lanes. In Norway – unlike e.g. in Germany – this makes them several thousand euros cheaper compared to gasoline cars.

According to a study of the renowned Center of Automotive Management (CAM) in Germany, 2018 was the first year to see more than 2 million e-vehicles being sold around the world. That makes it 2.4 percent of all newly registered vehicles. Apart from the main markets China and the US, Europe was closely analyzed as well.

In Germany, registrations grew moderately to around 68,000 passenger e-cars in 2018 as a whole, representing an increase of 24 percent. The market share rose from 1.6 to 2.0 percent. Battery cars increased proportionally to 53 percent; 47 percent of the e-vehicles sold were plug-in hybrids.

In the other European countries, Great Britain recorded an increase of 24 percent to 60,000 e-vehicles, while a total of 46,000 new passenger cars (+23 %) were registered in France. In Sweden, e-vehicle sales last year rose to just under 29,000 units, giving a market share of 8.1 percent. In the Netherlands, the sales figures for electric vehicles tripled to around 27,000, where the market share rose to 6.0 percent.

Italy is still facing a big challenge in the electric mobility but, despite its over 12.000 electric vehicles represent just 2% of this market, the year 2018 has registered a strongly increase (more than double compared to the previous year). If the government were to – as it seems – introduce incentives for those who buy an electric car by scrapping an old diesel or petrol vehicle, year 2019 could really be the turning point for the expansion of electric mobility in Italy.

For the current year 2019, CAM expects “a further moderate increase in demand for electric vehicles”. In forecasts, the researchers assume that e-vehicle sales worldwide will grow by around 40 percent to 2.7 million units. The global market share of e-vehicles is expected to rise from 2.4 to around 3.1 percent.

Binita Ghosh, Automotive Practice Group Leader in APAC, gives us a thorough analysis about one of the most peculiar automotive markets in the world, India:

With an ambition to be among the top 3 in automobile manufacturing by 2026 (as per the Automotive Mission Plan 2016-2026), Indian auto industry needs to consider an innovative and pragmatic approach to ride this transformation wave. E-mobility by far is the greatest opportunity for the Indian industry to participate and emerge amongst the top in the globalized automotive world.

Historically, mobility and fossil fuels have been inextricably linked with electric vehicles being successful only in a few niche markets. However, over the last decade, a collection of circumstances have conspired to create an opening for electric mobility to enter the mass market. Those forces include: climatic change, advances renewable energy, rapid urbanization, data capture and analysis. (Read more: Electric Mobility in India)

While India is operating in the same global context as other countries who have adopted an EV policy, it has a unique mobility pattern which other countries do not share. While vehicle growth in India is rapid, ownership per 1,000 population has increased from 53 in 2001 to 167 in 2015, a key difference between India and other countries and the types of vehicles being used. India uses a large variety of motorized transport on roads and its auto-segments are quite different from that of most of the world.

In India, premium four wheelers (cars) are only 2% of the total sales. However, most advanced technologies are available in this category in global markets. In the near term, India should foster early adoption of vehicles by premium customers which will pave the way for consumer comfort with electrification, raise aspirations for indigenous products and make advanced technology available in the market. The presence of world-class technology will help India build a world-class ecosystem for high-quality component and subsystems usable for all kinds of vehicles.

In the longer term, India should establish technological and manufacturing leadership in the economy segment of the market. The prevalence in India of small vehicles such as two-wheelers, three-wheelers, economy four-wheelers and small goods vehicles is unique among large countries. These small vehicles require a unique set of technological and industrial capabilities. Here, India has an opportunity to take a leadership role in the electrification of small vehicles. India’s potential volumes for these vehicles as the nation grows, lays the foundation for transformational manufacturing and industrial policy. That focusses on the development of technological expertise and industrial capabilities in the production of small electric vehicles which can not only meet domestic demand but can also place India in a position of global leadership. As other countries begin to look at smaller vehicles with appropriate specifications, India can establish a position of leadership based on domestic demand.

Beyond significant domestic demand for smaller vehicles, another aspect of the Indian mobility market is supportive of electrification: its high level of sharing. Shared mobility in India has exploded, changing the way India travels. Taxi aggregators such as Ola and Uber increased from 130 million rides in 2015 to 500 million rides in 2016, leading radio taxis to account for 72% of the overall market. This high penetration of shared mobility in India increases both vehicle utilisation, which plays to the economic advantages of EVs, and also creates natural and large-scale purchases of EVs.

Impact of EVs on Growth and Employment 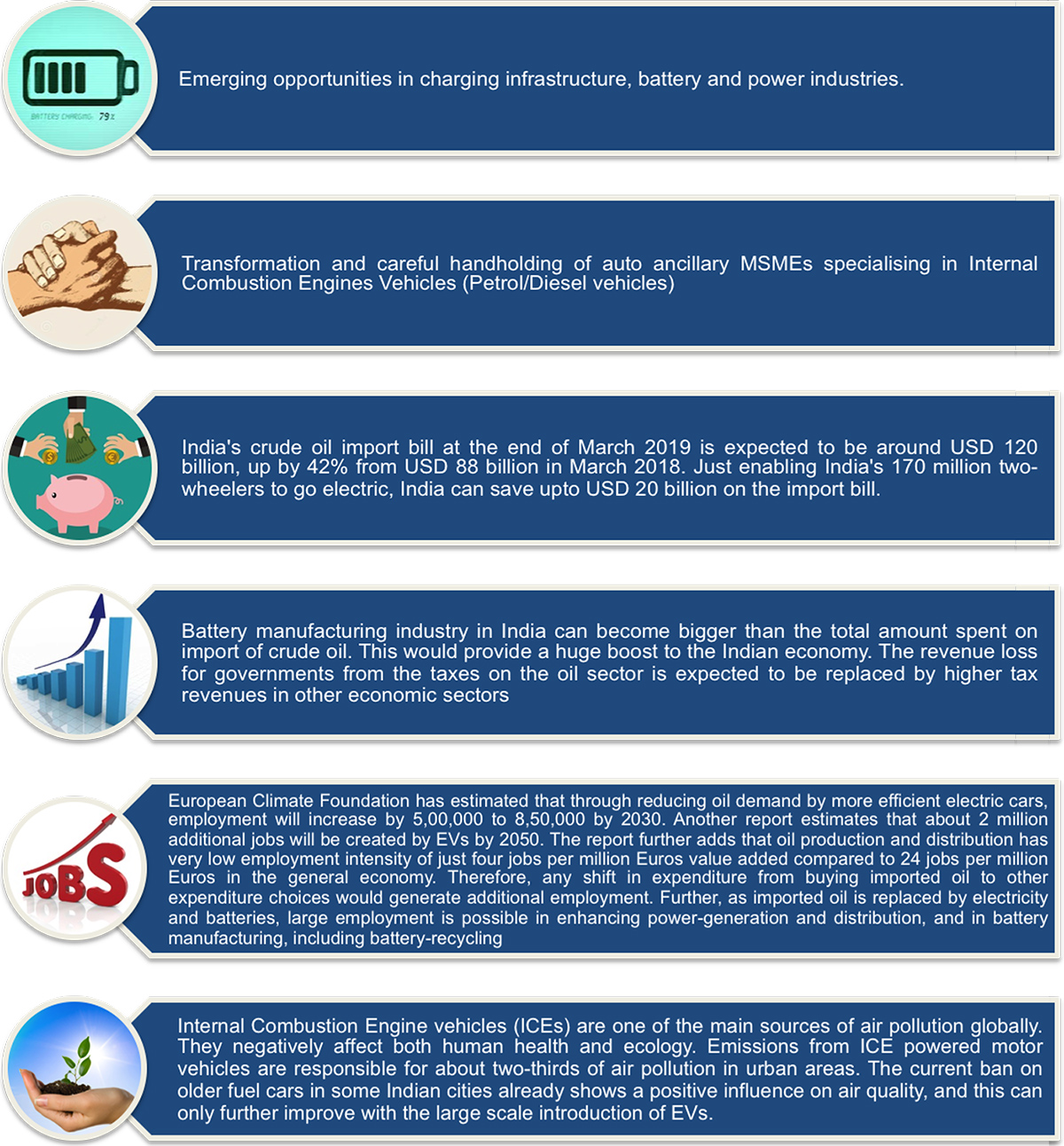 According to Malena Juarez, America’s regional leader of the Automotive Practice Group at InterSearch:

Electric vehicle (EV) policies helped the U.S. pass 1 million total sales in 2018 and California will drive U.S. EV deployment even further across the country in 2019.

Tesla has given its incredible contribution to this market and looking back on the progress of the last year, it’s clear what Tesla has been able to accomplish in a hard and flat vehicle market.
While EVs have accelerated across the U.S., Latin America has a long road to walk to reach such goals but 2018 has been the year where countries in the region started to see some developments in the electric mobility.

In Mexico, rising prices of gasoline (Mexico 0.99 USD vs. 0.68 in USA in Jan. 2019) and smog alerts that ban cars from the road unless they have “green permit”, have spurred interest in alternative–fuel vehicles. However, relatively high prices seem to distract many potential buyers, who do not have important tax incentives either. Scarce availability of charging stations around the country is a challenge.

From the manufacturing point of view, Mexico automotive industry is capable of participating in new technologies. The challenge will be to get ready to supply essential components for electric vehicle production, like batteries.

Chile’s ambitious plan to face down its capital Santiago’s notorious smog problem includes the rollout of electric cars, scooters and taxis. The government’s aim is electric vehicles to account for 40 percent of Chile’s private fleet and 100 percent of public transportation on the roads by 2050. The initiative puts Chile at the forefront of clean mobility in Latin America. But it does represent a significant challenge given the current lack of charging points in the country and persistently high price of electric vehicles.

The global auto industry has plenty of challenges and opportunities ahead. The major ones are well known: Electric and hybrid vehicles, self-driving cars, app-based transportation services and mass production low-cost models among others. Ford, for example, indicated that it would spend US$11 billion through 2022 to introduce and market three dozen battery-electric vehicles and hybrids.

“Transportation remains one of the largest source of emissions for the countries and EVs are the most promising technology to decarbonize this sector. With climate change impacts becoming more serious, EV deployment seems to be the key to a safer climate future”
said Olimpia Bisogni – Board Member, Automotive Practice Group Leader.

The global expectation is that EVs will get more efficient and better in 2019. The car makers are promoting a wider range of vehicle options to consumers, greater average range of battery for all models and utilities will continue to play a key role in EV deployment. By building and ensuring charging infrastructure and Governments providing incentives to increase consumer demand. The attitude towards EV will continue to evolve and consumer choices will increase.

Will Electric mobility transform the Automotive industry like never before?
For sure, our choices and determinations will strongly impact our future!