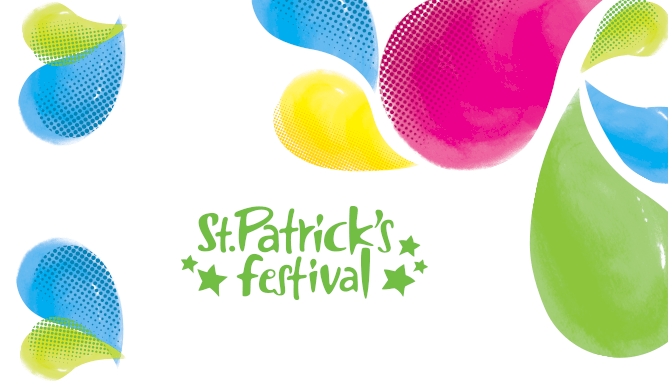 You probably won’t find green beer anywhere, but the feast day of Ireland’s patron saint is celebrated with parades, fireworks and general revelry in cities and towns all over Ireland. It is a national holiday with all schools and government offices and most businesses closing for the day.

The parades usually comprise floats, often with humorous themes, representing businesses, clubs and organisations in the region; marching bands, often visiting from the USA or elsewhere and increasingly in recent years street performers such as stilt walkers, clowns and jugglers.

While there is no doubt that St Patrick existed and that he was an important figure in the development of Christianity in Ireland, a huge number of myths and half-truths have built up around him over the years. Some make lovely stories and none do any real harm to his legacy, and many have some grain of truth in them, even if they have been embellished over the years by generations of story tellers.

Most adults in Ireland remember their childhood excitement at being taken to seethe local parade but it isn’t always a memory of unalloyed bliss – it always seems to have been cold and raining! In recent years the parades have become more elaborate, but unfortunately the weather is just as unpredictable.

There is something happening for St Patrick’s day in just about every town in Ireland, these are our selection of the better events and the ones most likely to be fun for visitors.

In the last few years Dublin has built a whole festival, lasting several days, around the annual St Patrick’s day holiday and it has been a great success. As well as the largest parade in the country there is a huge fireworks display over the River Liffey and numerous musical and street theatre events.

The crowds are enormous, comprising not only local people but many overseas visitors – in fact St Patrick’s day marks the unofficial beginning of the tourist season when visitors, like migrating birds, start to return in numbers.

More about the Dublin Festival

The Parade in Galway is a very theatrical event, with a strong emphasis on performers and was the first parade to liven up the once fairly boring procession of bands.

This was largely down to the theatre group Macnas (left, which was founded in the city in 1986 with the aim of bringing colourful and exciting performances out into the streets. Their influence on all parades has been huge.

Ireland’s second city, Cork  also has a lively programme of events, with the parade at its centre but also music, theatre, puppetry, a food festival and a three day Carnival of Fools.

Other options for St Patrick’s Day

If you would like to escape the crowds in the cities, there is an amateur Theatre Festival running in Clonakilty in West Cork at the same time, where there are invariably excellent shows to go to and a very lively social scene with theatre groups from all over the country in attendance.

If you have children one of the best places to go is Ennis, where the Glor Irish Music Centre have a terrific St Patrick’s Weekend Festival which is a celebration of traditional music, song and dance for children and is great fun. There is always plenty for adults to do around Ennis and it’s a great place to hear top quality traditional music at any time of year.

Get away from the crowds entirely and go walking through some of the most gorgeous scenery in Ireland at the Four Seasons Walking Festival in Connemara, which runs over the St Patrick’s weekend. Events include hiking in the Twelve Bens and the Maumturk Mountains and walks on the islands of Aran, Omey and Inishbofin.