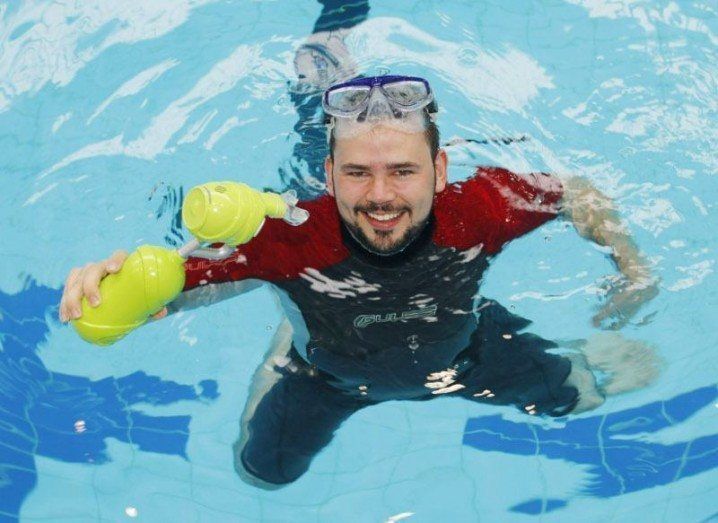 Express Dive allows divers to breathe underwater for up to two minutes. Once the air supply begins to run out, the user simply resurfaces and holds a button to refill the one-litre tank.

Redmond (26) will receive a cheque from the James Dyson Foundation for €2,500 and proceed to the international stage of the competition, competing against students from 20 countries for the overall prize of €37,500 to develop his design.

Four other Irish inventions will also proceed to the international stage of the James Dyson Award. These include: a Sense device to help firefighters sense their environment developed by Eilis Delany from Dublin Institute of Technology; Music-ability, an electronic music instrument for disabled people created by James Fogarty from Cork Institute of Technology; Contour, a toolkit for people with repetitive strain injuries created by Kevin Hannon from NUI Maynooth, and Rosta, a child proximity alarm aimed at preventing farm accidents and fatalities developed by Lynne Whelan from IT Carlow.

Unlike traditional snorkels, Express Dive allows the user to dive to much greater depths as it has its own separate air tank.  Meanwhile, a full scuba kit can cost in the region of €3,000, as opposed to an estimated €400 for Redmond’s device.

It was whilst on a holiday in Greece that Redmond, a keen scuba diver, concluded that there was a big gap between snorkelling masks and heavy scuba-diving equipment

“I was on a boat excursion when I saw a shiny object on the seabed. I wanted to be able to go a little further than I could with just my lungs, but, of course, I did not have scuba equipment with me,” Redmond said.

“I saw a need for something lighter, inexpensive and portable that everyone could use for leisure diving. Scuba equipment is bulky and expensive and the preparation process is rigorous and time-consuming. When your air runs out you are done until your next fill.”

Redmond’s final prototype comprises of a compact air tank, an air regulator and a compressor combination made from high-density foam, aluminium and silicone.

An inbuilt battery drives the compressor to capture air and store it in the air tank. The air is then delivered to the diver in exactly the same way as a scuba system, in conjunction with a dive mask.

The aim of the finished design is to bridge the gap between basic snorkelling equipment and sophisticated diving apparatus.

Redmond hopes to bring Express Dive to market in early 2017.