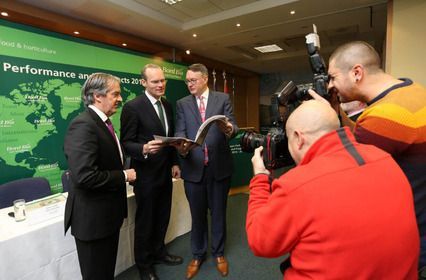 Irish food and drink exports climb for fifth year in a row to reach €10.5bn

Ireland’s food and drink industry has clocked in a fifth consecutive year of export growth, with exports in 2014 going up 4pc to reach a record high of nearly €10.5bn, according to Bord Bia’s Export Performance and Prospects Report.

Chief executive of Bord Bia Aidan Cotter noted that the growth last year represented an expansion of 45pc or €3.2bn since 2009.

There has been a significant shift in the destinations for Irish food and drink exports, according to Cotter.

“The industry’s drive to broaden export reach to destinations outside of the EU is paying dividends with growth in emerging and international markets now driving export figures, offsetting the limited growth in our established premium EU markets,” he said.

While it remains Ireland’s most significant export market, the share of exports destined for the UK eased slightly though the value showed little change at €4.2bn or 40pc of export share.

The value of exports to other EU destinations grew by 2pc to reach €3.3bn equating to 31pc of total exports reflecting largely static consumer price inflation across the eurozone.

For more on this please click:http://www.businessandleadership.com/exporting/item/49021-irish-food-and-drink/