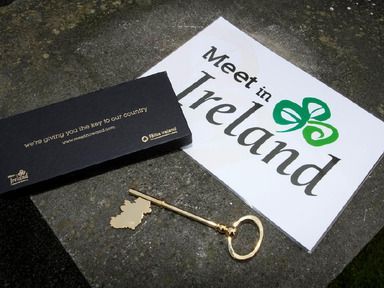 Four international conference wins for Ireland worth €2m to the economy

Fáilte Ireland said today that four international conferences, bringing 1,400 delegates to Ireland and and worth almost €2m to the economy, have been won for Dublin through its conference ambassador scheme.

The national tourism development authority also said it will shortly in announcing another another four conference wins, totalling over 2,000 international delegates and worth an additional €3m.

The agency revealed the wins at a industry briefing where it announced a revenue target in 2015 of €61.5m from business tourism, up 8pc over last year.

The conference wins announced today are: CERME (Conference of the European Society for Research in Mathematics Education) which will hold its 10th Congress of European Research in Mathematics Education (CERME 10) in Dublin in February 2017; International Equine Ophthalmology Consortium Symposium which has been confirmed to meet at in Malahide in June 2016; the IATA Aviation Security conference, being held in October 2015 The Convention Centre, Dublin; and the general meeting of the Association of National Numbering Agencies (ANNA) in the Conrad Hotel in Dublin in June 2015.

“The conference delegate is a very important – and lucrative – piece of the tourism jigsaw,” said Shaun Quinn, CEO of Fáilte Ireland. “The average business traveller tends to spend two or three times as much as a leisure tourist. This is incredibly important for many of those hotels and venues who cater for such events and generates much needed jobs as well as revenue in the sector. Furthermore, business events can be a great way to win new converts as many conference-goers come to Ireland for the first time ever for work reasons and return again for a holiday.”

Today’s briefing in the Intercontinental Hotel in Dublin was for key players in the MICE sector (meetings, incentives, conference and events).  It was attended by over 250 members from across Ireland’s business tourism sector, representing conference venues, hotels, professional conference organisers, destination management companies, university conference offices and regional convention bureaux.

Fáilte Irelands business tourism team said it will achieve the €61.5m target by generating and converting international corporate, incentive and association conference business for Ireland. It will also provide a further financial and practical support to international conferences that are already secured for Ireland this year under its “Meet in Ireland” brand.

Attendees today also heard that generating leads with the potential for a higher number of delegates per conference is the central focus for Fáilte Ireland’s business tourism unit this year, as well as a greater regional spread of conferences.

“International conferencing will also continue to be a priority for us this year,” said Quinn. “The conference sector is a competitive business but, happily, Ireland continues to punch well above its weight.

“To date we have recorded 117 conferences taking place in Ireland this year – worth a combined value of €57m to the Irish economy. Next year and beyond is also looking positive, with 70 conferences already secured, along with a potential €84m in revenue for the Irish economy. We will be keeping our foot on the pedal and identifying, pursuing and converting as many leads and opportunities as we can”.

Quinn said a further 218 conferences are currently being bid for at the moment, with a potential value of €302m if all are secure.