Euro zone government borrowing costs slid to new lows on Thursday, a day after the European Central Bank pledged to fulfil its €1 trillion euro bond-buying programme, although regional stocks took a step back from this week’s multi-year peaks.

Global stocks, however, touched a fresh record high thanks to renewed strength in Asian markets, while Brent oil surged to its highest this year after figures showed a fall in US production.

Investors also fretted about the deepening crisis in Greece. Credit rating agency Standard & Poor’s downgraded Greece and there appeared to be no thaw in the icy rift between Athens and its creditors that would unlock bailout funds and bring the country back from the brink of default.

In early trade Germany’s 10-year yield was down almost a basis point at a new low of 0.087 per cent. The yields on all German government debt out to January 2024 were negative.

Other notable levels included France’s 30-year yield falling further below 1 percent and the yield on two-year Portuguese bonds flirting with going below zero.

“We see no end in sight to any of these trends,” said Ciaran O’Hagan, rates strategist at Societe Generale in Paris.

Borrowing costs in peripheral euro zone bond markets like Spain and Italy rose, however, as the prospect of Greece and the euro zone reaching agreement appeared to fade.

Earlier in Asia, MSCI’s broadest index of Asia-Pacific shares outside Japan touched a seven-year high and closed up 1.1 per cent. South Korean, Australian, Chinese and Malaysian stocks gained, pushing the MSCI global index to a new high of 438.99 points.

Japan’s Nikkei lost 0.1 per cent, and US futures pointed to a slightly weaker open on Wall Street as investors pause for breath after shares posted sizable gains on Wednesday on several strong corporate earnings results.

Lacklustre economic indicators have been mostly kind to risk assets this week, with Wednesday’s weak Chinese data further boosting expectations of monetary stimulus by Beijing while soft US data has helped by dampening prospects of an early rate hike by the Federal Reserve.

In currencies, the biggest mover on Thursday was the Aussie, lifted to a three-week high as stronger-than-expected Australian employment numbers reduced the odds of an interest rate cut in the next few months.

The euro was 0.5 per cent lower at $1.0630, weighed down by ECB president Mario Draghi’s commitment on Wednesday to seeing the central bank fulfil its bond-buying programme. This quashed speculation in some quarters that the programme’s success could lead to an early “taper”.

The market will look to US housing data later in the day for further dollar incentives.

Brent crude rose as much as 5 per cent overnight to a high of $63.10 a barrel, its highest since December last year. It was last trading at $62.60.

US crude was at $56.00 a barrel after jumping nearly 6 per cent on Wednesday. 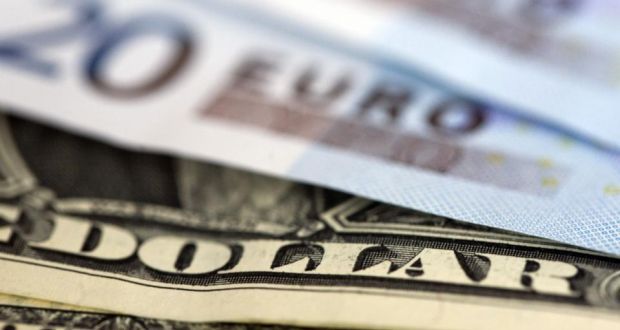 Euro sinks to 12-year low against dollar as QE bites

Decisive action needed to get European recovery on track

Copyright © 2010 - 2018 InterSearch Ireland Ltd. Developed by Selfmed.pro All Rights Reserved!
X
Ireland ranked in 25th place for exploitation of ICT…Business NewsIreland has been ranked 25th out of 143 economies in a new study that ranks countries on their ability to exploit information and communication techno…
Business News

3 min
X
US bill a boost to proposed EU-US trade dealBusiness NewsIbec, the group that represents Irish business, today welcomed the introduction of the Trade Promotion Authority (TPA) bill to the US Congress , which…