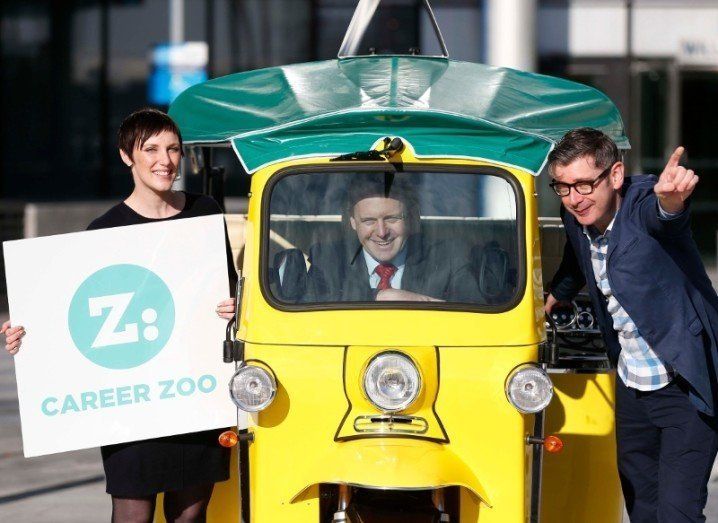 Career Zoo, Ireland’s leading technology recruitment event, will return to Dublin’s Convention Centre on 12 September, and is expected to draw crowds of over 10,000. The event was launched earlier today.

Companies participating in Career Zoo 10, the tenth since Career Zoo began in 2011, will be aiming to fill opportunities across multiple sectors, including big data, fintech, finance, pharmaceuticals, science and technology.

Present at the launch were some of those who found employment at the last Career Zoo event. Some of the organisations that participated in February were able to hire over 20 candidates as a direct result of Career Zoo.

This September, many companies taking part are announcing massive recruitment drives to centre on the event.

Speaking at today’s launch, Minister for Jobs, Enterprise and Innovation, Richard Bruton TD, highlighted the importance of tech recruitment events like Career Zoo to Ireland’s job landscape: “Technology is a key sector which we have targeted as part of our action plan for jobs and, over the past four years, we have seen an impressive jobs performance in this area.

“Career Zoo is a brilliant initiative which helps to connect tech employers with vacancies with the people who might fill those jobs,” he continued. “I am delighted to be involved, I commend Brian Ó hOisín and his team – but, more importantly, I hope that the employers and jobseekers involved will have a successful event with many jobs filled.”

The face of Career Zoo has changed significantly since its early days, moving from the Mansion House to the Convention Centre.

The jobseekers themselves have changed, too.

It’s really interesting to look at how the profile of attendees has changed over the past few years,” says Brian Ó hOisín, director of Career Zoo. “The big shift is that it’s not a candidate’s market, rather than an employer’s market: candidates with the right skill-sets have all the power, and employers have to pull out all the stops to attract and retain the talent they need.”

Furthermore, says Ó hOisín, the attendees are now more globalised. “Ireland has become a magnet for international talent… Our last Career Zoo event saw attendees from over 35 different countries, and we expect this trend to continue at Career Zoo 10.”

Career Zoo 10 will emphasise opportunities in big data and fintech. It will also include a Women in Tech space, which will facilitate mentoring workshops for women in tech.

Returning this year will be popular elements of previous Career Zoos, including the Speaker Series and Tech Box, Tech Town, BioCluster and the Python Coder Hack Space.

Science Foundation Ireland, the National Institute for Bioprocessing Research and Training (NIBRT) and Open University will also be participating.

Admission to Career Zoo 10 is free. The event will run from 10am to 5pm on 12 September in Dublin’s Convention Centre. For further information, and to register for the events, visit the Career Zoo website.